Girls love to talk. Talks give expression to experiences. And experiences ought to be shared. What follows is a candid confession of a foodie in their own words (I did not even edit it!). Trust me, there is nothing like listening to a food lover talk about food. They describe it as a writer would describe his characters, like an artist paints his imagination, like a performer expresses himself through his dance. They surround you with the aroma, let your taste buds tingle and make your mouth water… with praises of what they ate and you could not. This one should rather be termed as the one-stop guide for food in the Golden city of Amritsar.

Warning: Do not be stumped by the number of delicacies sampled or the amount of food eaten. After all they say, when in Punjab, do as Punjabis do! 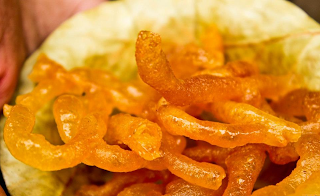 At the impossibly narrow Katra Ahluwalia, adjacent Jalianwalla Bagh, a Jalebi shop of no name sells the best in town. Faint-hearted tourists often get pointed towards Novelty at Lawrence Road for the best Chaat (Aloo Tikkis are made with onions and black gram and with the potatoes shallow fried even before they are made into tikkis and fried again – no don’t watch calories here) and Jalebis. But this is the ‘it’ place.

Outside the temple, there are shops selling Badiyan (made from dried Urad dal seasoned with a variety of things, including guava) and Aloo Papad, another traditional treat. I stop to pick up a bundle, and upon inspection, find the papads to be exactly what you’d buy in Benares. The shopkeeper, one Mr. Aggarwal ji, whose family has been in the city for 200 years, offers a plausible explanation: women from UP traditionally settled in this town have been running this thriving home-business.

The rickshaw puller keeps up a constant chat: The best Milk Barfi is to be found at the Longewala Mata Mandir near the Golden Temple, he tells me, and then takes me to Gyan Halwai, opposite DAV College, for Lassi. When it arrives, the frothy concoction topped with cream, in big steel tumblers, is intimidating. I can barely manage a quarter of a glass.

The walled city around the Golden Temple, the oldest part of Amritsar (look here for flights to Amritsar), is vegetarian. So, are some of the oldest dhabas here. Bharawan Dhaba (thus called because it was set up by two brothers) was established in 1912 by Jagannath Vij, well before the Partition exodus made eating out acceptable. According to Vij’s grandson, who now mans this destination, in the earlier days, people would get their atta (wheat) and ghee and other ingredients and merely have these cooked here. Today, of course, this is a bustling enterprise. House special- Dal Makhani is cooked in a copper vessel for an entire night. This place gives you a whiff of nostalgia even if the setting has pastic-y table tops.

The other such haven for food-freaks is Kesar ka Dhaba but I am still in a stupor before the rick takes me to Hindu College, next to which stands another Amritsari favourite: Ahuja Lassi. In the mornings, you can sample their famous Kesar ki Lassi—flavoured with saffron (saffron “threads” are ground and mixed with milk before the yoghurt is set) but even the usual non-flavored glass is creamy and lip-smacking.

Having finally junked the rick, I head out to Lawrence Road for some non-vegetarian treats. The Tawa Meatwallah near Adarsh Talkies has shut down, Beera’s chicken (for tandori style treats) at Manjithia Road is still the best place for fowl, but Surjeet, mentioned in Lonely Planet and a favourite with Bollywood stars, is clearly thriving. Instead of the small fish shop that he started out with near the railway station, there is now a new “restaurant”, air-conditioned, where you can sample Surjeet Singh’s delicacies. We try the Amritsari fish (the Ista version is better), the totally fabulous mutton tikka (instead of the plain tandoori version, this one comes coated in a secret masala having been fried on a hot iron griddle as well after being over-roasted), first-rate tandoori chicken and soft, fluffy aloo kulchas. We are full and not just with Amritsari pride.

Back at Ista, next day is a relatively simple affair: Simple? Well, that’s not possible in this city. A lunch of Chole Kulche gets transformed to a gourmet meal thanks to what arrives at our table: Chickpeas in a curry that can only be attributed to another world — or to Amritsar’s partiality towards delicacies.

I hope you loved this food blog. Like I said... experiences should be shared! Happy Eating!
Posted by Maanya at 10:19 PM