For exactly the past seven days, I’ve been holed up in my house. I haven’t met people, except those who inhabit/visit my home; I have felt neither the sun nor the rain on my skin; I haven’t been out in the fresh air; I haven’t lived. I’ve spent my days in a zombie-like state: Eating, Sleeping and Eating …in any order you prefer.

No, I have not gone insane… nor am I depressed. I’m experimenting. I’m trying to feel for myself what life would be like if the luxuries of Nature and society were one day suddenly denied to me. How would it feel if one day I woke up to find not a single soul willing to talk to me, much less touch me? How would I react if I were confined to a small room so dark that not even a sliver of light can breach the darkness? As they say, I would be alive, but not Alive...

Scary as it may seem, this horrid exclusion is exactly what thousands of children in India face when they’re diagnosed with HIV.

During my two-month stay at Hyderabad, we visited Desire Society, a care home for children affected and infected by HIV/AIDS. The institute is home to about sixty-five children affected by HIV. During our interaction I came across two especially lovely girls, Lakshmi and Sirisha. There was an instant connection with these best friends. Was it the way they coyly approached me, the way the perfectly copied my steps as we danced to Bollywood hits or their sheer excitement when I met their pet rabbit… I will never know. 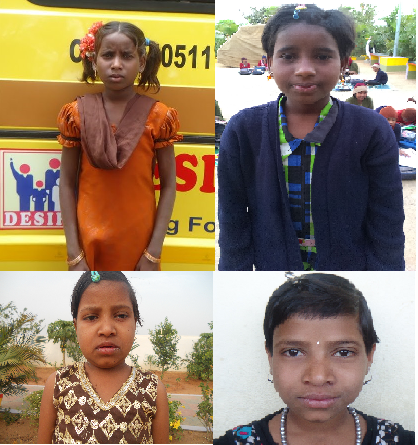 Outcast by the society, orphaned at a tender age, here were two little ladies whose passion for life far exceeded mine. As they skipped around to show me their moves, their smiles hid the trauma they’ve undergone. While one was admitted with symptoms of tuberculosis when she was all of four years, the other was turned away by her family and friends alike. In this world far away from our own, they pretended to be little princesses for whom life has been one nice fairy tale. The reality…far from pleasant

In a country like India, where awareness about HIV is at sub-zero levels, any child infected with the virus at birth is treated as a curse to society. Food, family, shelter…they have nothing. Battling ill-health, these kids wage a war for survival every single day. It is a battle against an empty stomach, against an evil society that refuses to take them in its fold, against a system which systematically discriminates against them.

What we need to understand is that shutting them out is not the solution. In India, roughly 80% of HIV infections in children are vertical, i.e. mother to child transmissions. The remaining 20% get infected owing to blood transfusions and sexual activity. Symptoms might appear as early as before a baby completes a full year of his life, to a few years later in the childhood. Since this deadly virus lowers the defense mechanisms of the body, these children are prone to opportunistic infections as well as neurological manifestations.

They show an increased tendency to suffer the usual childhood infections, such as a common cold, with a magnified intensity. If left untreated, something as curable as diarrhea may be the cause of death. Unlike their counterparts at institutions like Desire Society, most children don’t have access to even such basic healthcare. Much more debilitating diseases follow.

I find myself unable put in words the hardships they face. But I'm sure if you have the means to read this, you must know this already. The question is, what have we done to help?

P.S. I'll upload some pictures of their artwork soon :)